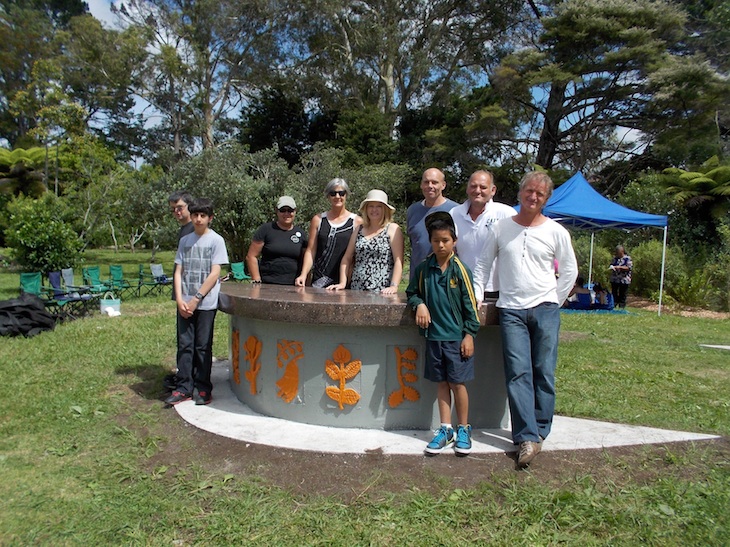 Millbrook Edible Garden now has a new table and seating area envisaged as an extension of the community garden – to be used by the community for workshops, displaying produce, lectures and more.

He wanted his design to be utilitarian, but also use beautiful imagery of seeds and produce to reflect the garden. He designed the table and seats to be made out of poured concrete that was then polished. The inlaid rocks represent seeds from the gardens. The designs on the sides of table and seat are from moulds made by mosaic artist Rowena Rooney and also worked on by students from two schools (Sunnyvale Primary and Bruce McLaren Intermediate) and volunteers from WOW (Way Out West).

After making the moulds out of clay, an imprint was then taken with plaster of paris which was set into the boxing and the surrounding space was taken up with concrete.

Although this community arts project involved many people, artist Guenther Andraschko made special mention of two volunteers Wayne Cooper and Tim Croft “they were a great support and helped me from go to woe”…

On Friday December 13th 2013 this new artwork was unveiled with a special blessing from Pa Riikau and supported with waiata from the Tuia Mekaio Kapahaka Group from Bruce McLaren Intermediate.

Shannon Bowden at the design stage