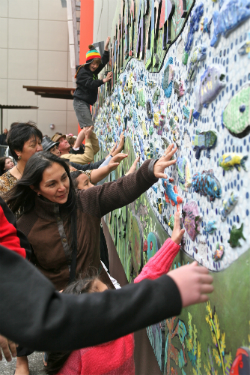 The resulting 27 metre long mural was delivered to its new home alongside the Oratia Stream at Westfield’s WestCity shopping centre in nine panels and took contractors ten days to install.
“It’s been a huge undertaking because the mural is on a massive scale and it weaves together a number of intricate details. It features 500 mosaic fish, 60 self portraits and six mosaic koru. Each of these individual elements had to be fitted together like an enormous jigsaw puzzle, then grouted in place.

But the hard work has paid off, with the mural already proving a great point of pride for those schools, community groups and local residents who contributed. “It’s all worth it to see the pride and sense of achievement on the faces of those seeing their work for the first time,” says Mandy Patmore, Project Twin Streams Arts Coordinator and Kei tua mai Project Manager. We have worked with 13 local schools and 11 community groups over the past year and a half to create their pieces. Not only has it given them an opportunity to learn about the environment and the health of our local streams in a new way, it’s also given them a chance to express themselves in a way that words often can’t,” she says.

The mural has been well received by those groups involved, who until the unveiling had only seen small sections of the overall artwork. Youth from the Mary MacKillop Education Centre, an alternative education provider, created one of koru for the mural. “A number of the girls have had their photos taken with ‘their’ section of the mural. They’re really proud to be able to share their work with their peers and families,” says Papi Moka, Education Centre Manager.

The ceremony drew on the talents of local students with attendees welcomed by a moving waiata sung by Henderson Primary School pupils. They also performed a song about the Oratia Stream that they had composed for Project Twin Streams’ 2008 Song Quest.

Te Kawerau a Maki’s kaumatua Eru Thompson, named the mural and led the blessing ceremony. Kei tua mai is a Maori proverb which loosely translated means to come full circle and reflects the mural’s theme of restoring the environment back to its natural state.

“I asked those present to run their hands over the mural, to warm and connect it to them and transfer their mana to Kei tua mai. I’d invite those who visit the mural to do the same to retain this connection with those who created it and as a reminder of the importance of caring for our streams and our communities,” he says.